Once considered an extinct language Ngun Kungarakany has risen out of the ashes like the Pheonix, revived, and, ready to be spoken in its full glory.

“Aborigines identify themselves by the language they speak and this gives them certain dignity and significance as a special group of peovple.

As for us, it settles the matter of who we are, then we should move on to what we can do in the future”.[1]

The revival of Ngun Kungarakan first began in the 1970s when Senior Kungarakan Elder Ida Koormundum Bishop started documenting and researching the Kungarakan language.  In a promise to her mother Margaret Poordjetpudjen Edwards, Koormundum made it her lifelong commitment to record and document the language.

In 2000, Koormundum self-published a Lexicon of Ngun Koongurrukun: Speak Koongurrukun, a collection culminating over 30 years and many thousands of miles in between to realise her dream and promise to her mother.  This enormous body of work was Koorundum’s Ngirrwut, a transference of knowledge to be understood from its own cultural basis, the very essence of Koongurrukun identity.

While it is acknowledged other Kungarakany people embarked on their own language journey, these clusters of language work were not easily accessible or consolidated as an entire series.  Koormundum’s published book Ngun Kungarakan has awakened the language and made it tangible for Kungarakan people to learn and revive this ancient and complex language. 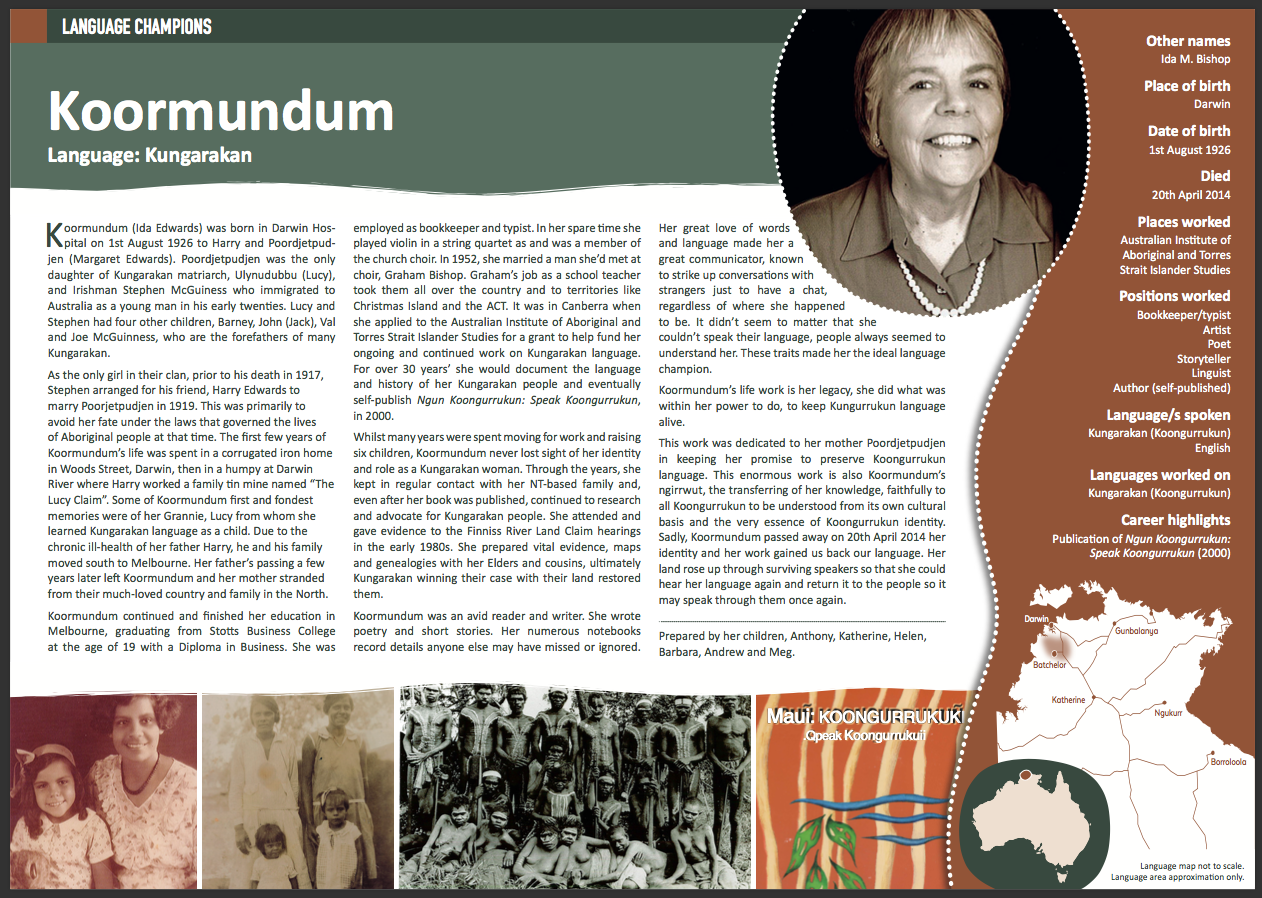 The most challenging component of the project was the review and update of the Kungarakany orthography, which while challenging, created some very entertaining moments through listening to archival audio and getting our mouths around the original pronunciation. This project was initiated by Helen Bishop undertaking her PhD at Batchelor and her retrieval of archival materials and to honour her mother who produced the first Kungarakany dictionary. Maree Klesch managed the project with Kungarakany Education and Cultural consultants Trudy Avlonitis, Mia Stanford, Brendan Monck and Charlee Horni taking on linguistic responsibilities. (CALL)

The Kungarakany language resources are due to be released soon and here is a taste of what is to come.  Arrakany tjaput wudjarmem

Kungarakan descendants now number in the hundreds despite several recorded tragic incidences early last century. These dark days in Kungarakan history in which men, women and children were killed.

The  catastrophic event at Stapleton has  been recalled by Kungarakan Elders passed down through the generations, one of these, Joe ‘Pumeri’ McGinness (dec.)  was told about it first-hand by his mother, Alyandabu who survived that terrible day:

“The group was, at the time of the tragedy, camped at a railway siding known as Stapleton about fifty miles south of Darwin….Those who ate the poisoned damper became violently ill before their death. As a result of this incident, practically the whole Kungarakan tribe was wiped out” [2]

On  27 Sep 1884,  ten Kungarakan men and women, and a child were shot at Argument Flats by Settlers who claimed the shootings were an act of self-defence to a reprisal. The incident was documented and recorded in 1886 and is now a registered Massacre on the Colonial Massacres map as recorded by Newcastle University.  The massacre was entered into the Quarterly Report on the Northern Territory by the Administrator in November 1884.  This project is ongoing and there is more information to be researched on the massacres at Adelaide River and Stapleton Siding by the researchers at Newcastle University.  Information about the Colonial Frontier Massacres in Australia 1788-1930:[3] project can be found here.